Female Artists Through The Ages: 1600 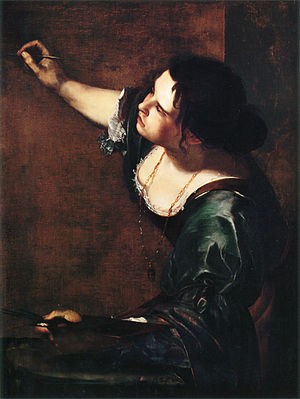 Self-Portrait as the Allegory of Painting, 1630’s

Artemisia Gentileschi (1593-1656) was an Italian Baroque (a period of artistic style that uses exaggerated motion which began around 1600 in Rome, Italy) painter. She was born in Rome on July 8th, 1593 of the painter Orazio Gentileschi. She showed much more promise in the arts than her younger brothers, in this time women artists were not easily accepted by many patrons or fellow artists. She was the first woman to become a member of the Accademia di Arte del Disegno (Academy of the Arts of Drawing) in Florence. After being raped by her painting instructor and pressing charges against the man her reputation became more about that than her paintings. After the trail (where the man was found guilty) Artemisias paintings did tend to have strong independent women portrayed.

As Artemisia grew older her work became more “feminine” and graceful. She was originally thought to have died in 1652/1653 but because of evidence suggesting she accepted a commission in 1654 tells us otherwise. Some think that she died shortly after in the devastating plague that swept Naples in 1656.